The British have something of a reputation for a degree of ‘quirkiness’, and this seems no different in their approach to the death care industry.  The UK has recently held an event to celebrate the innovation emerging in the ‘alternative’ sector of the funeral industry.  This was staged in recognition of the changing trends in green funerals, life celebrations, new online memorial technologies and the more weird and wacky offerings that people can choose for their final send-off.

The Joy of Death Festival was staged in Bournemouth on the September 7 – 9th 2012 and attended by good funeral folks from all over the United Kingdom.  The strap line for the event “A weekend for the Living!” 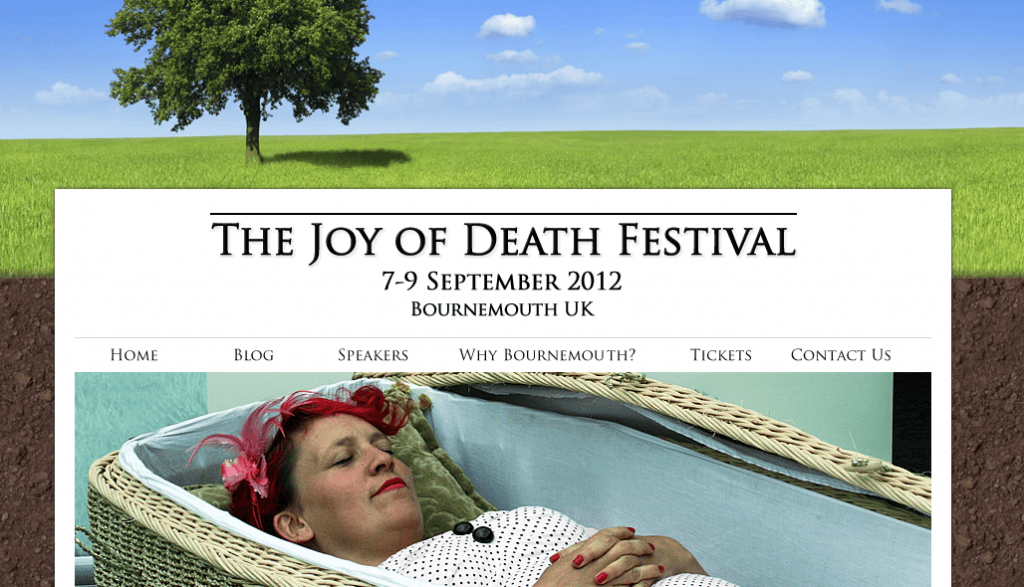 The event was not only an opportunity for many funeral professionals to share practice on some of the new innovations within their industry, it was planned to help celebrate all the good funeral work undertaken by many across the U.K.  It was hoped it would dispel the recent bad publicity coverage of the funeral industry after the Channel 4 Dispatches ‘Undercover Undertaker’.  A program that conducted a scathing expose on the behind-the-scenes happenings at the largest corporate funeral chain in the UK – Cooperative Funeralcare.

The first UK Funeral Awards took place on the Friday and were based on 149 nominations from within the industry and from the general public.  The categories of the Good Funeral Awards were:

These categories provided the opportunity to highlight the trades and skills from across the funeral sector, and winners and runners-up with invited to speak about their business.  This was a very different event to the standard Funeral Directors Association Conventions, and hopefully we may see something like this take off in the U.S.

The death care industry in the U.S. is undergoing some significant shifts right now, with the cremation rate rising, and many looking towards a ‘life celebration’ as opposed to the traditional somber event.  Some states are responding more progressively than others, especially where the cremation rate is already higher, such as California, Florida, and Maine, and where there is a greater interest in greener alternatives to the traditional burial.

This is a time of change right now.  The way people think about funerals is changing, the use of technology is starting to firmly seat itself into the funeral planning, memorialization and even funeral service aspects of a funeral.  The cost of a funeral is being questioned and interrogated now more than ever as people struggle with the idea, or the finances, of spending thousands of dollars on the death care process.  DIY funerals are becoming a new ‘norm’ and are moving from the slipstream to the mainstream.  Families are questioning why they should give so much money to ‘professionals’ to manage their death care.

In the U.K. the cremation rate is at around 80%, and families can generally attend directly at the crematory for a private committal.  DIY funerals and direct cremation has already started to storm the U.K., as the British demand simplicity and affordability in their death care.  What is happening over the pond is beginning to sweep across America as the price-war for affordable funerals takes off.