Reports are abound today from the United Kingdom about the crisis of “funeral poverty” which is being prophesied as the next social crisis for families.  Figures estimate that 100,000 families will hardly manage to pay for a funeral this year.  It seems when so much focus has been on the ‘cost of living’ for the past few years, we may have avoided facing the crisis that hits many families – the cost of dying! 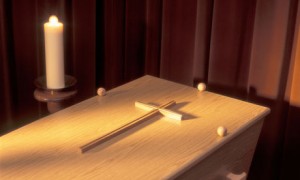 Funeral costs have gone up dramatically in the UK over the last year due to changes in energy prices and control on emissions.  Between 2004 and 2013 the cost of a funeral has risen by 80%.  The average cost of a funeral in England now stands at $12,528 (£7,622) and this is when the UK cremates around 75%.

According to a Sun Life report [Sept 2013] one in five people can’t afford a funeral – however the number of people who are knocked sideways financially, for even years afterwards, probably exceeds 20%  considerably.

A very similar crisis is quietly looming here in the United States, and we should take note on how our allies across the pond are responding.  The cremation rate in the UK has been steadily rising for the last 4 decades now.  Last year energy prices increased significantly, and new European laws on emissions meant many crematories had to install new equipment and filters.  The result – a 7.1% increase in cremation costs.

Why are funerals so expensive? 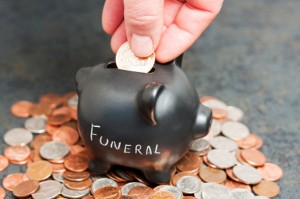 The average funeral in the U.S. costs $7,045 (National Funeral Directors Association 2012) without any cemetery fees.  In reality the average traditional funeral, with cemetery costs included, is likely to be in the region of $10,000.  Could you produce $10,000 cash to pay for a funeral today?  Even financing a funeral is not as easy as it may seem in our give-away credit culture.  Understandably it is not the most appealing credit venture for credit companies to finance a funeral.  After all, re-possessing a casket, corpse and burial plot is not that easy!

Why does a funeral cost so much?  Good question, and in all reality it need not cost thousands of dollars.  It IS possible to arrange a very dignified funeral for between $800 and $4,000, depending upon whether you opt for cremation or burial and where you are located.

Cremation is storming the U.S. right now, largely because it offers such a lower cost alternative to expensive funerals.  Direct cremation is the trend which is most startling, and the demand for affordable direct cremation in the U.S. is rising exponentially!  A direct cremation is a simple, no fuss disposition option.  The deceased is cremated without any ceremony and the ashes returned to the family.  Of course, the family can then arrange their own memorial service if they so choose.  In a way, it enables families to reclaim the act of the memorialization ritual and help us move back to family-led funerals – the way it used to be done over a century ago!

How is funeral poverty going to affect families and the funeral industry?

Death is part of the natural lifecycle and our death rituals are a fundamental aspect of our culture.   Over the last century or so, we have always managed to take care of our poor – whether the church rallied round, a family member stepped in or a benefactor helped out.  But with so many families now falling into that bracket of not being able to afford a funeral, the support systems that traditionally helped are struggling to cope.

States and local municipalities each allocate a budget for indigent funerals, or any aid for those families that cannot afford a funeral.  However, as budget cut-backs have been made, funds in many areas have been reduced, if not axed altogether.  And, of course, should a family qualify for public aid there is an onerous application process to obtain the funding.

This means that families are facing the crisis of the loss of a loved one without a solid support system, and funeral homes are trying to continue operating whilst accruing more bad debts!  I have witnessed more funeral homes insisting on full payment before agreeing to take on a funeral contract, and an increase in funeral businesses that are offering a low cost cremation alternative to meet the market demand for cut price funerals.  Revenue for funeral homes is down and more funeral homes will close down or be consolidated.  Look at what is happening with Service Corporation International acquiring Stewart Enterprises!

The death taboo: Discussing your final wishes and preplanning a funeral 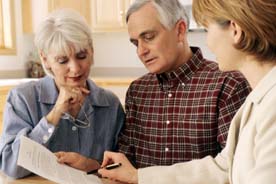 In this last year we have seen some new approaches to dispelling the taboo surrounding death in our culture.  A number of cities have held ‘death cafes’ and the death over dinner organization have held dinner parties around the U.S.  All in a bid to encourage people to talk openly about death and what their final wishes are.  Although 90% of Americans believe it is a good idea to preplan a funeral – only 10% actually do so!  This just demonstrates how adverse we are to preplanning arrangements for our end of life…almost as if doing so will bring it on!

With the death rate set to increase over the next 20 years, life expectancy increasing and senior care costs often depleting families’ financial resources – it is becoming more vital to preplan and prepay for funeral expenses.  This doesn’t have to mean preplanning elaborate services, or even forking out thousands of dollars into a funeral trust.  It simply means setting your wishes out, ensuring your surviving family understands how you wish to be taken care of upon your death and ensuring the funds are available.

A Totten Trust (Payable on Death Account) is an extremely safe and effective way to lay away the funds to cover your funeral.  You can name 2 beneficiaries, who can immediately access the funds [without Probate] upon your death, yet the funds remain in your control and you accrue any interest.

You will also find that many of the low cost funeral and cremation providers are now offering simple cremation plans that can be prepaid.  You can preplan and prepay a cremation for under $1,500 in most areas of the United States, and for less in many metro areas.

The Pauper’s Funeral: The rise in demand for public aid funerals

In ye olden days a pauper’s funeral was considered the only end for the poorest in society – so what does it say about our society when the demand for pauper’s funerals is on the increase?  In the UK they have an excellent welfare and benefits system and the Social Fund Funeral Payment, launched in 1988, helps to support those who cannot afford to pay for a funeral [if eligible].  As mentioned above, our system here in the U.S. lacks consistently across the nation and in some areas may be almost non-existent.

We try and help families every day who are worried about how they are going to pay for a funeral, and in many cases it means opting for the cheapest cremation they can find.  Social Security does pay out a lump sum death benefit [again for those that qualify] which can contribute $255 to a funeral fund, but this does not go a long way to cover full burial expenses.  Both the UK and U.S. report a rise in demand for public aid to pay for funeral expenses.  And more families are having no other option than to choose a cheap cremation.

With a rising death rate, a growing senior population living longer and spending on nursing care, impending funeral poverty should be a concern for our government.  It is clear that unless some improved strategy and provision is put in place, we are certainly heading towards a potential death care crisis.