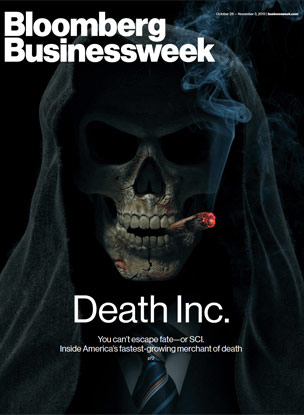 Businessweek has this week chosen to cast a spotlight on the $16 billion death care industry.  The cover of Businessweek features the ominous title ‘Death Inc.’ as it takes a look “inside America’s fastest-growing merchant of death.”

The feature refers to Service Corporation International (SCI), the largest corporate player in the funeral industry, who is in the process of taking over Stewart Enterprises (STE), the second largest corporate death care company.

This take-over will give SCI a 15% share nationally of the funeral industry in the U.S., with an even greater share is some markets such as Florida, Texas and California.  Which, of course, happen to be states where significant populations reside. 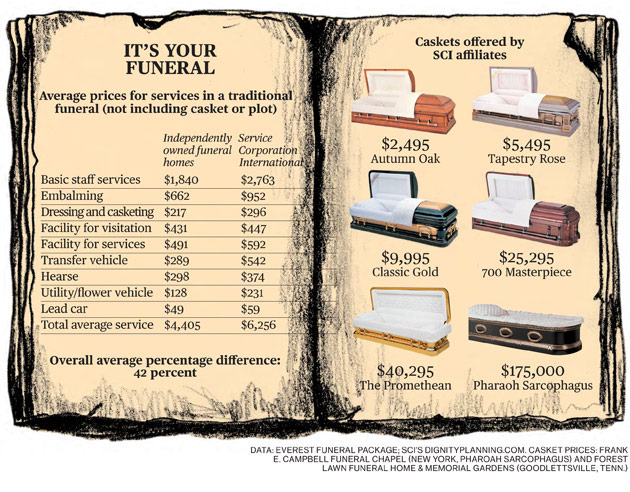 The message is clear – economies of scale do not operate with SCI as they do for other corporates in other markets.  Let’s take Walmart for example, who certainly hurt the funeral industry when they introduced their $995 casket.

The more consumers become aware of the insidious aspect of the funeral ‘sale’ and can make more informed decisions, thousands of unnecessary dollars can be saved by families on funeral costs.

The DFS Memorials network was established specifically for this cause.  To help families save money on funeral costs, and to champion the independent Mom and Pop funeral homes, who in many cases DO offer far better value than the corporate funeral giants.

Never mind $3, 396 – our network of cremation providers can offer a basic cremation with a service for half this cost!  A direct cremation can be purchased in some areas for as little as $495, and in most metro areas is available for under $1,000.

Click here to read the full story from Businessweek.

If you want an inexpensive funeral option – check out your local DFS Memorials provider.