During my time working within the death care industry, I have come across many new words and terminology, and I would have to concur that there is a particular discourse to the industry.

Ossuary derives from the Latin ‘ossua’ meaning bone and therefore can be referred to as a ‘depository for the bones of the dead.

An ossuary is an ancient term that describes a ‘space’, be it a tomb, building, well or chest, which holds numerous skeletal remains communally.  It was typically used where space was very limited, and the deceased would first be buried in a temporary gravesite and then after some years the skeletal remains exhumed and placed in the ossuary.

In modern terms, an ossuary often describes a type of mausoleum or columbarium that holds many cremated remains together, and can provide a receptacle for the dispersement of cremains, whilst still providing a ‘common’ area. 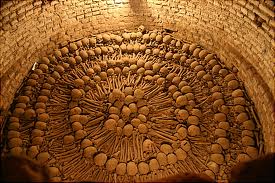